"Audrey" represents the type of engine installed in the experimental laboratories of most Technical Colleges and Universities. It is specially designed for teaching purposes and incorporates a number of features which would not normally be found together on a commercial engine.| 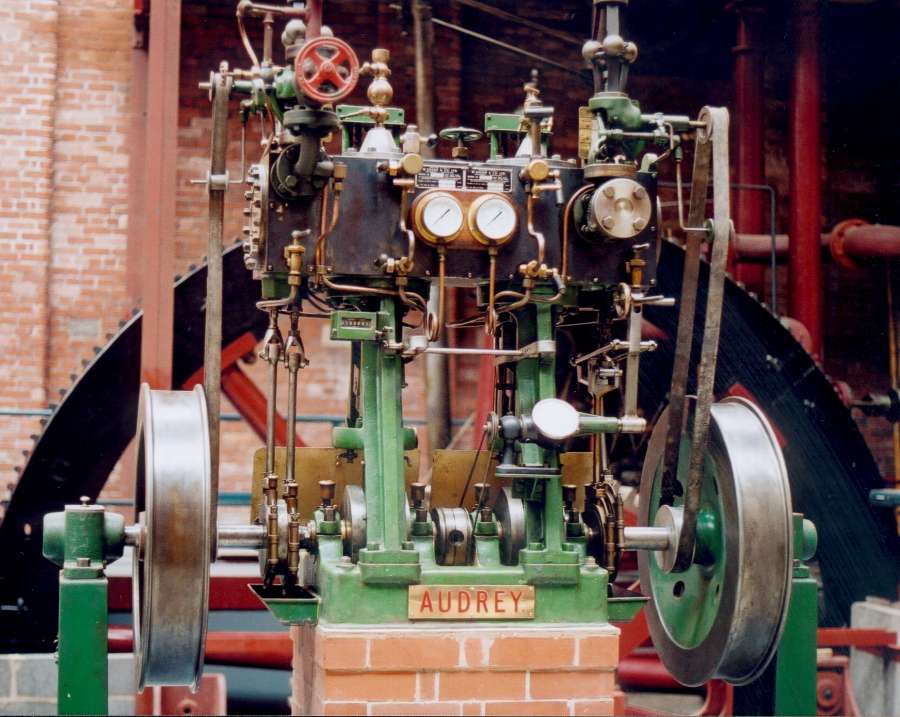 It can be set up as a compound or as two separate engines, each with its own governor ; the 4" HP cylinder has a Meyer expansion valve and the 7" LP has Stephenson's link motion with two eccentrics. Built by Sissons of Gloucester in 1961 this is by far the most modern engine in the collection !

An unusual (and patented) design of engine manufactured by Mather and Platt of Manchester to drive "stentering" machines used in the textile finishing trade to stretch the cloth after dyeing or bleaching. 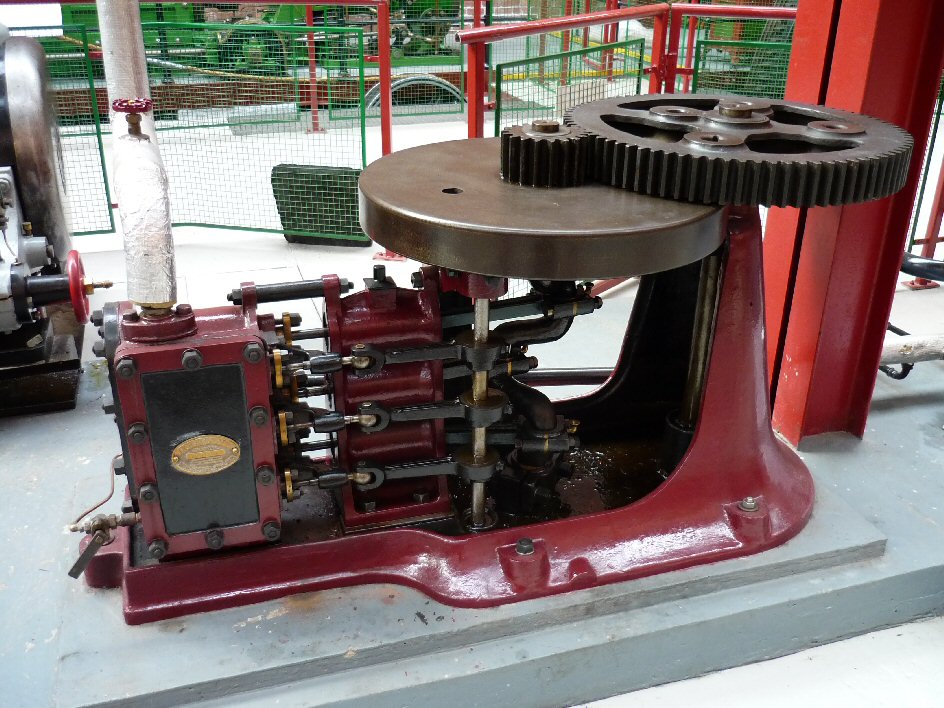 The three identical cylinders are 4" bore and 6" stroke with the cranks equally-spaced at 120 degrees, enabling the engine to start at any point. As with the double-diagonal engine, there is no governor and the speed was regulated by adjusting the steam supply.

This small engine was acquired over 30 years ago from David Whitehead Fabrics Ltd, Rawtenstall. With a bore of 5" and stroke of 10", it is a typical example of the single cylinder engines built by their thousands by Tangyes Ltd of Birmingham. 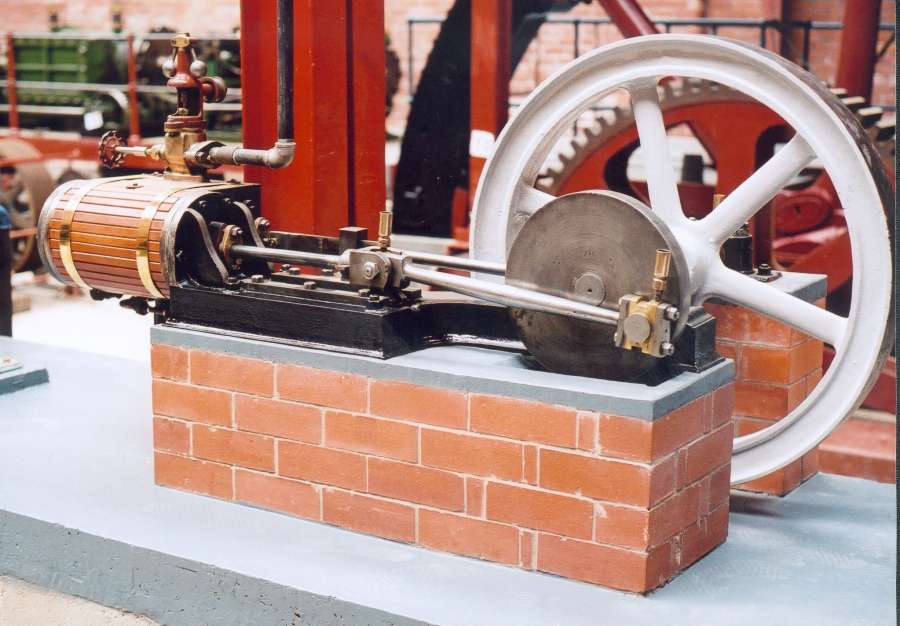 This is the smallest engine in the collection and is believed to have been built by S S Stott Ltd of Haslingden for special use as a portable engine for taking from site to site to be used a source of power when carrying out engineering work. This was before the days of widespread electric power for driving motors.

When a steam engine with large cylinders became worn, so that the piston no longer fitted properly, it was common to re-bore the cylinders, making them a fraction of an inch larger. However, since the casting often weighed many tons and removal to a workshop would have taken too long and been too expensive, the work was frequently carried out on site. This small engine would have been used to provide power to the re-boring equipment which was clamped to the cylinder being re-machined.

The slide valve is driven by an eccentric on the crankshaft that can easily be moved to another position to alter the timing so that the engine can run in either direction. 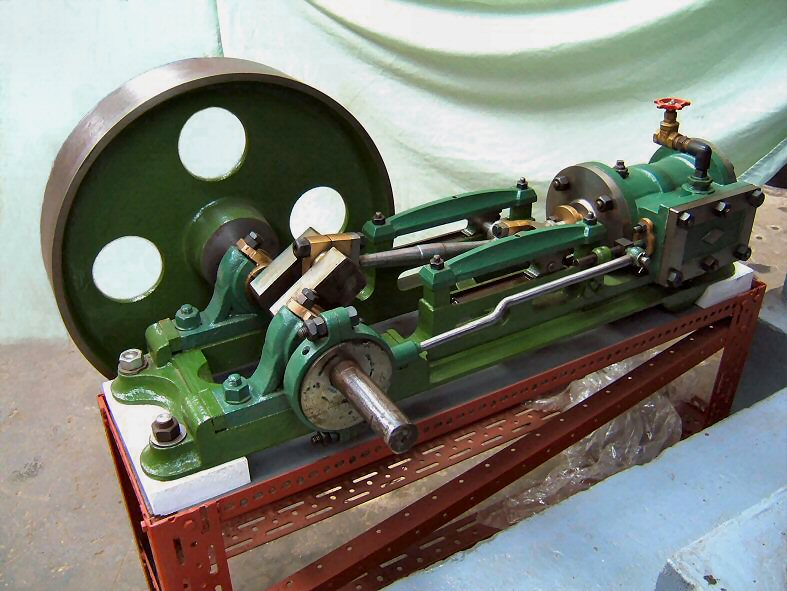 This is a small vertical engine made by Thomas T Crook of Stanley Street Ironworks in Bolton . The company made a range of small engines and other machinery from the 1880s onwards but this one, with 6” bore and 8” stroke, was used to drive the machinery in their own pattern shop. It is displayed in the museum driving a short section of line-shafting as was used universally in textile mills before the installation of electric motor drives. It is on long-term loan from the Bolton Museums Service 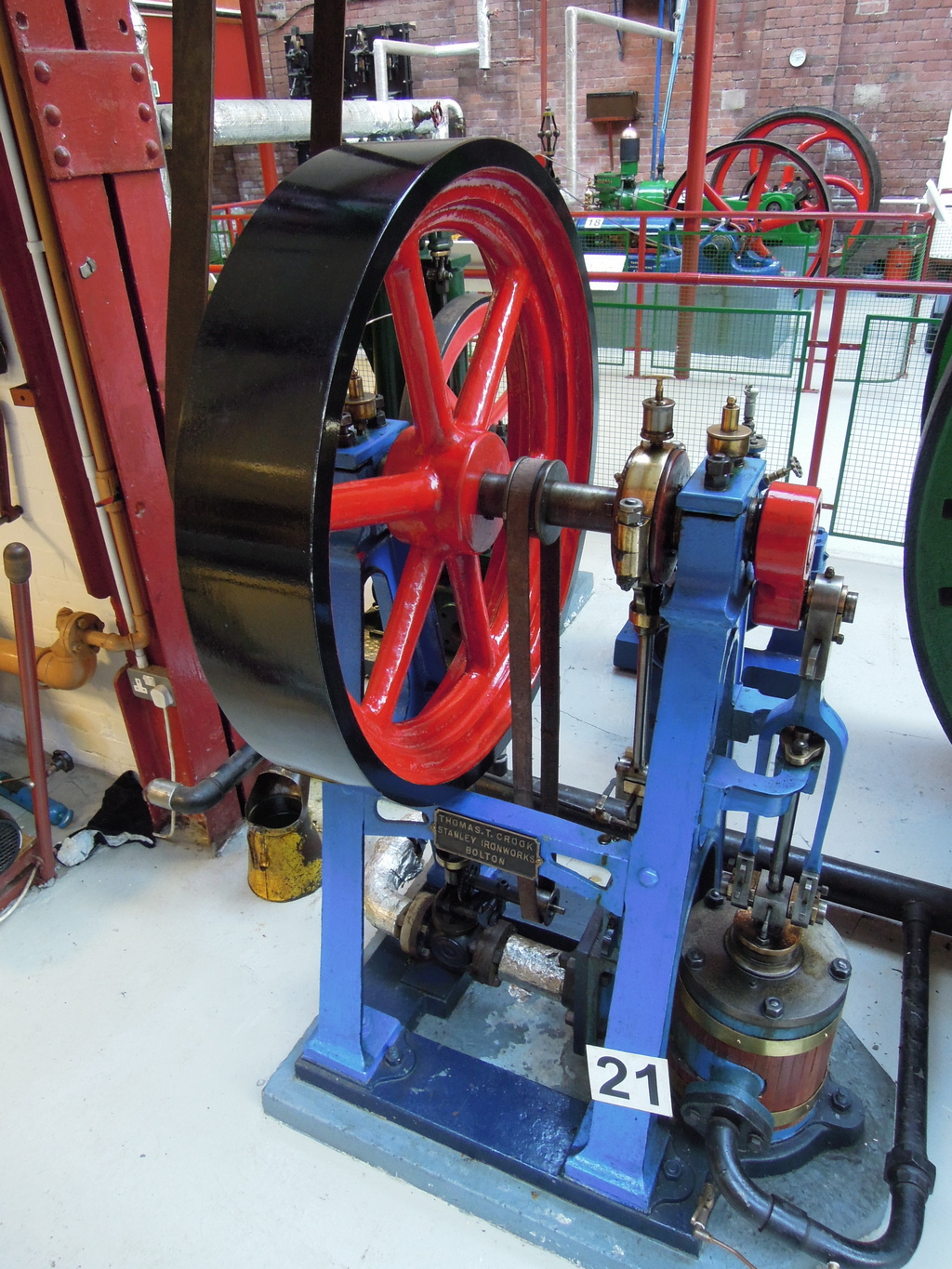 This engine was made by Edward Bennis & Co of Little Hulton near Bolton to drive their automatic boiler stokers. It was originally installed at the Manor Mill at Chadderton for the range of 5 coal-fired Lancashire boilers on the site but was acquired by the well-known steeplejack and TV personality Fred Dibnah in 1978. He installed it in a shed in his garden to drive the range of vintage workshop machinery he assembled there until his death in 2004. It is now on loan from his sons Jack and Roger Dibnah 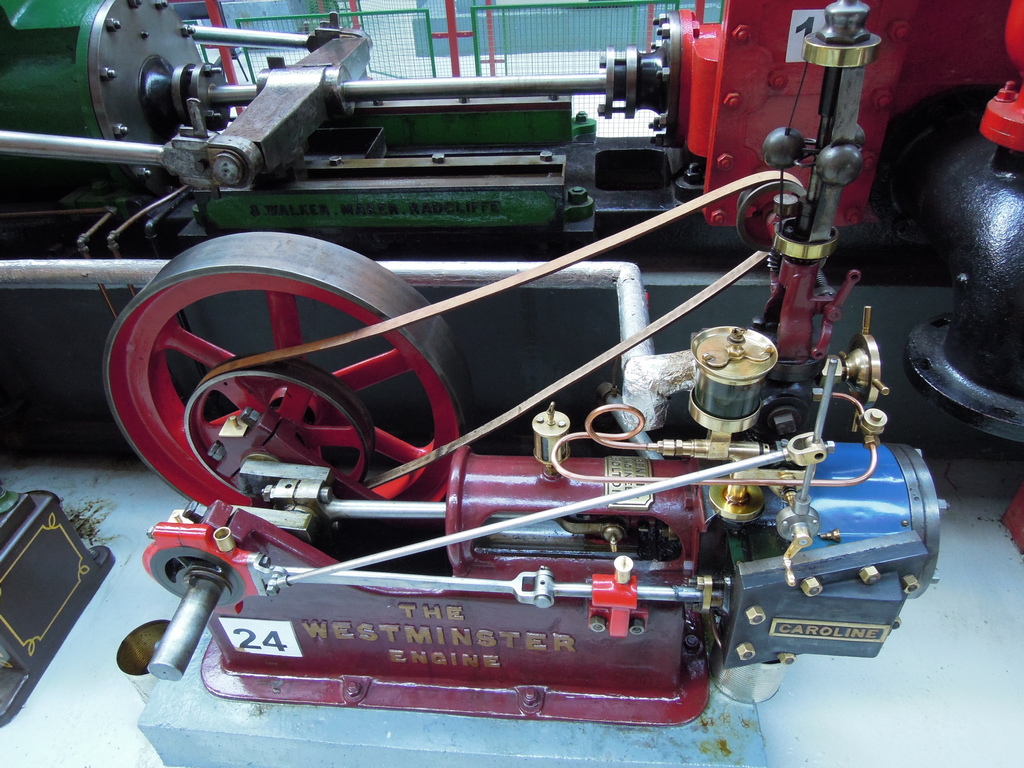