This is the largest engine in the collection and represents the type of engine that was very widely used in the textile industry in the early days until it was superseded by more modern - usually horizontal types. 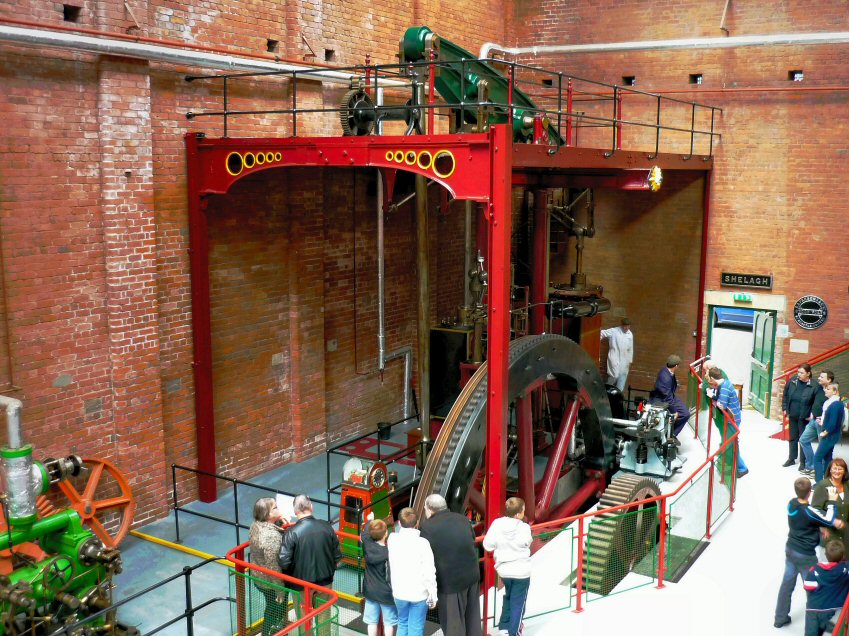 There was a constant demand for increased power in mills over the years as new machinery was installed. In some cases, the owners chose to scrap the old engine completely but in others it proved possible to increase the power without totally throwing away the original engine. This is an example of such a system, patented by William McNaught of Glasgow, and widely licensed and applied by many engine-makers throughout the country. 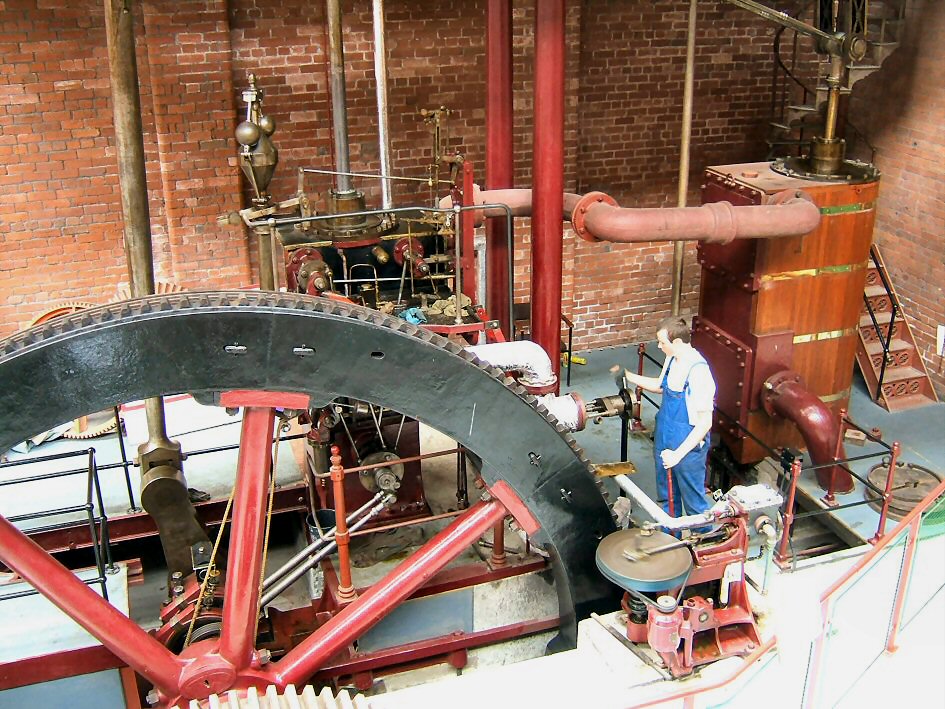 The age (and maker) of the original single-cylinder beam engine is unknown but is thought to be about 1870. It was installed at Messrs Fisher Firth's Cellarsclough Mill at Marsden, near Huddersfield and in 1908 Woodhouse and Mitchell of Brighouse undertook the "McNaughting" of the engine. A new additional high-pressure cylinder was installed at the crankshaft end of the engine and the original cylinder became the low-pressure of what was now a compound engine.

The big advantage was that force from the new cylinder acted in phase with the connecting rod, rather than putting the beam under more bending load by applying even more force at the low pressure end. Nevertheless, the amount of rebuilding that was required was still enormous and one can only marvel at the way in which all this material was installed in what was a very small, narrow engine-house, probably working to a very tight timescale.

The high-pressure cylinder is 20" diameter with a 3ft stroke and the low-pressure is 36" diameter with a 6ft stroke. The HP is fitted with Corliss valve-gear (see also Wasp Mill Engine) and the LP has retained the original slide valves. As with the Society's other beam engine, the entablature and the platform structure around the beam was built into the walls to provide the necessary rigidity. Indeed, the removal of the engine had to be carried out over a period of several years so that the engine-house could be slowly demolished to allow access to remove each part of the engine in turn.

The power for the mill was transmitted from the smaller gear seen in the photographs - not from the flywheel. In the early history of the engine, this caused many problems with vibration and noise and eventually a completely new crankshaft, steel gear and outboard bearing had to be fitted - another major rebuild !

The flywheel itself is 18ft in diameter and is built up from 8 heavy segments and has a total weight of about 30 tons.