The Horizontal Cross-Compound engine, with the high and low pressure cylinders arranged on either side of a central flywheel, was another of the most common designs of textile mill engine.

Very large engines of this general layout were made up to 4000 IHP with cylinders of over 6ft diameter to drive entire cotton spinning mills. By having the cranks set at 90 degrees, four power strokes from the engine took place every revolution, thus ensuring excellent uniformity of speed - an important consideration for cotton spinning.

This is a very small example of the type, having been made specially for teaching and experimental purposes in the laboratories of the Manchester College of Technology (later UMIST) by Robeys of Lincoln in 1935. The cylinders are 8.5" (HP) and 16"(LP) with a stroke of 22" developing about 80 IHP at 120 rpm. Drop valves are fitted to both the inlet and exhaust of both cylinders, the LP having a manually-adjustable trip point and the HP trip being controlled by a small governor. 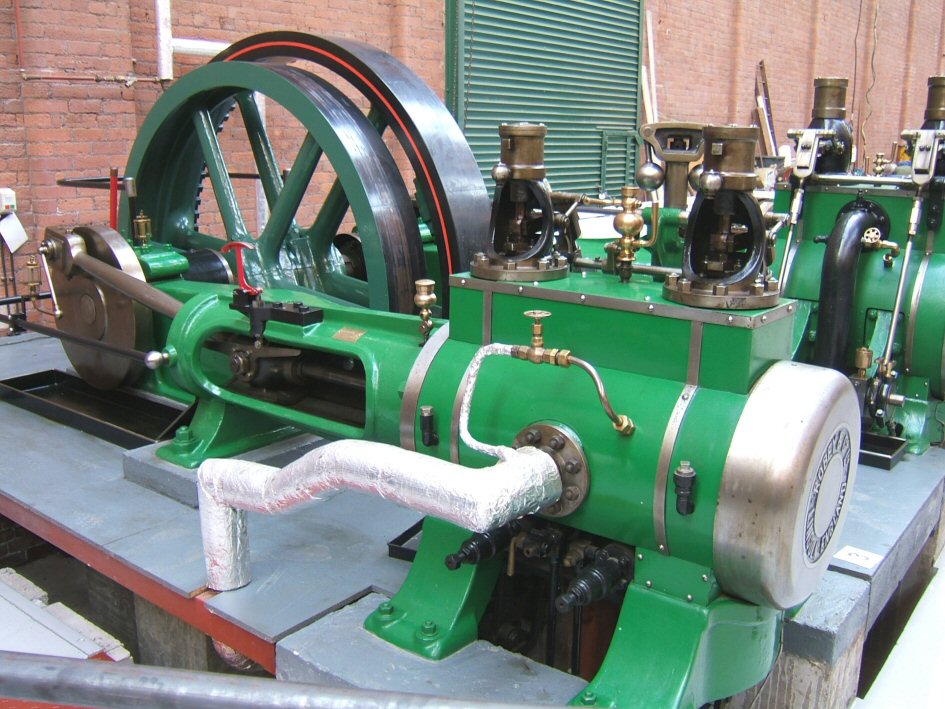 The large pulley beside the flywheel could have been used for a belt drive to the mill or factory, but in this case it is a relic of the engine's original use in the laboratory. A large friction band brake was applied to the wheel to measure the torque and hence calculate the power being delivered by the engine.

The engine was removed from the College in 1947, stored for 40 years by Thomas Mitchell Ltd of Bolton (in the hope of reselling it), before being eventually purchased by one of the Society's members and loaned to the Society in 1987. The engine was donated to the museum in 2019